National Parks Near Jackson. There’s so much more to the Magnolia State than the Ole Miss.

In this article, we’ll familiarize you with the incredible national parks that are within a day’s drive of downtown Jackson.

Now let’s go ahead with 5 reasons why you’ll want to hop in your car and make a day’s drive from Jackson to one of these truly amazing places.

Where to Stay in Jackson

Visiting Jackson, Mississippi? If you haven’t decided where to stay (yet) here’s our favorite hotel in Jackson.

Visit The National Parks Near Jackson

Established by Congress in 1971 and managed by the National Park Service, the Gulf Islands National Seashore is a 160-mile stretch of Gulf Coast barrier islands from Fort Walton Beach, Florida, to Cat Island, Mississippi.

There’s so much here to see and so much to do! Or, you can just relax and let the world go by as you enjoy the beautiful scenery at your leisure.

What To Do On The Barrier Islands

Cat Island is a great place to explore bayous and marshes which are home to several species of birds and alligators. All but the western half and southern tip of the island is privately owned however.

Petit Bois Island, meaning “little woods,” is almost 6 miles long. It’s a great place to swim and fish. Horn Island is a favorite spot for swimming, boating, and relaxing in the sun. It has long stretches of beach and several species of flora and fauna to observe.

In addition to options for swimming, sunbathing, birding, hiking, and fishing, Ship Island also offers a boardwalk for easy trekking across the island. There are also covered picnic areas for visitors to enjoy a full day of activities.

If you’re a bird watcher then welcome to Bird Watcher’s Paradise! Over 300 species of birds are found at Gulf Island National Seashore. These include Black Skimmers and Brown Pelicans which sail only inches above the ocean surf.

Visitors can tour the home, which has been restored to look the way it did when Medgar and Myrlie Evers lived there.

Civil Rights activist Medgar Evers was the first field secretary of the NAACP in Mississippi. He once said, “You can kill a man, but you can’t kill an idea.” Evers organized voter-registration efforts and economic boycotts, and investigated crimes perpetrated against Black people.

To protest racial injustice, Evers orchestrated a major boycott of white merchants. This made him a target of the Ku Klux Klan. Backed by federal troops, he also led efforts to help James Meredith successfully integrate the University of Mississippi in 1962.

Medgar Evers was assassinated outside of his Mississippi home in 1963. It took over thirty years for justice to be done, but, in 1994, his killer was finally sent to prison.

Myrlie Evers-Williams is an American civil rights activist and journalist who worked for over three decades to seek justice for the 1963 murder of her husband Medgar. She picked up the torch he left behind serving as a leader of the National Association for the Advancement of Colored People (NAACP).

Myrlie Evers-Williams established the Medgar and Myrlie Evers Institute in Jackson, Mississippi. In 1995, she became the national chairwoman of the NAACP.

In the Antebellum South, Cotton was king. As a retired history teacher, I always love a good history lesson so here goes.

Antebellum refers to the years prior to the Civil War. It was during this period that cotton emerged as the South’s major commercial crop eclipsing tobacco, rice, and sugar in economic importance.

By 1860, the region was producing two-thirds of the world’s cotton. How was the South able to produce so much? Excellent question.

In the eighteenth century, slavery appeared to be on the way out because the demand for slaves was decreasing. This was until 1793 and then everything changed.

1793 was the year Eli Whitney went to Cumberland Island to help a former college friend expand his cotton crop. It was there where Whitney revolutionized the production of cotton by inventing the cotton gin, a device which separates the seeds from raw cotton.

Suddenly, a process that was extraordinarily labor-intensive when done by hand could be completed quickly and easily.  While Whitney’s machine reduced the labor of removing seeds, it did not reduce the need for slaves to grow and pick the cotton.

In fact, cotton growing became so profitable for the planters that it greatly increased their demand for both land and slave labor. And this increased demand for slaves set the stage for the Civil War.

Natchez National Historical Park documents the role Natchez played in the creation of the Cotton Kingdom. The historical park is made up of three units, Fort Rosalie is the location of an 18th Century fortification built by the French and later occupied by the British, Spanish and Americans.

The William Johnson House was a house owned by William Johnson, a free African American businessman, whose diary tells the story of everyday life in Antebellum Natchez.

Melrose was the estate of John T. McMurran, a northerner who rose from being a middle class lawyer to a position of wealth and power in antebellum Natchez.

Visitors can capture a moment in history when people had built a lifestyle on the backs of an army of enslaved workers. A trip to this historic site helps visitors to understand life in the Antebellum South before the Civil War.

It was Robert E. Lee who once said, “It is well that war is so terrible, otherwise we should grow too fond of it.” The Battle of Shiloh proved Lee’s point.

The 23,741 casualties in this battle were five times the number versus the First Battle of Bull Run in July of 1861. They were more casualties in this one battle than all of the war’s major battles (Bull Run, Wilson’s Creek, Fort Donelson and Pea Ridge) up to that date combined.

Also Known As The Battle Of Pittsburg Landing

The Union army how has nearly 54,000 men near Pittsburgh Landing and outnumbered Beauregard’s army of around 30,000.

Johnston, however, intercepted the Federals 22 miles northeast of Corinth at Pittsburg Landing in an attack which totally took Grant by surprise.

“The Devil’s Own Day”

On April 6, 1862, the first day of the battle was a difficult one for the Union. Grant suffered heavy losses. At the end of the first day’s fighting, Grant’s second-in-command, William Tecumseh Sherman remarked:

Well, Grant, we’ve had the devil’s own day, haven’t we?” To which Grant replied, “Yes, lick “em tomorrow, though.”

During the first day’s fighting,  Confederate Commander Albert Sydney Johnston was shot in the right knee. The bullet severed an artery and the commander bled to death.

Despite having everything go wrong for him, Grant ordered a counterattack on April 7th, which drove the Confederates from the field. This time, it was the Confederates who were caught off guard.

They were forced to fall back. Their new commander, General Pierre G. T. Beauregard, decided that the essential arithmetic favored the Union. He ordered a withdrawal.

The South’s defeat at Shiloh ended the Confederacy’s hopes of blocking the Union advance into Mississippi. It doomed the Confederate military initiative in the West.

It also provided the Union with a much-needed boost in morale given Robert E. Lee’s victories in the east.

Forgive me for spending so much time on the history of this conflict, but I did teach history for over a quarter of a century. When I’m writing these articles, I always try to do a deeper dive when it comes to conveying a sense of the history and why it matters.

The world’s greatest learning laboratory is where history happened. At the Shiloh Battlefield and the Corinth Civil War Interpretive Center there are exhibits spaces which show visitors the weapons of war, the people who used those weapons, and the effects of their use.

I only wish I could have taken my students to some of these incredible places, but we simply didn’t have a big enough budget for those field trips.

I recommend beginning the tour by watching the award-winning film, Shiloh: Fiery Trial.  There are also films on the Battle of Shiloh and the impact which this battle had on the town itself.

Then there’s an excellent self-guided tour. It is a 12.7 mile car route with 22 stops at such famous places as the Peach Orchard, the Hornet’s Nest, and the place where Albert Sidney Johnston met his end.

The Siege of Vicksburg has been recognized around the world as one of the greatest military campaigns in history.

According to John Henry McCracken, Professor of History Emeritus at Lafayette College, it was at Vicksburg that Ulysses S. Grant learned only hard, long fighting and logistics will win the war.

Cutting The South In Two

The victory cut the South in two and doomed their efforts in the West.

There are some excellent books on the Battle of Vicksburg.

One of my favorites is Vicksburg: Grant’s Campaign That Broke the Confederacy by Donald L. Miller. Another is Vicksburg, 1863 by Winston Groom.

Things To Do At Vicksburg National Military Park

At Vicksburg National Military Park, there’s a vast array of cultural, historical and natural resources. Each visitor to the park receives an official park brochure and map detailing the driving routes, tour stops, and provides a brief history of the Vicksburg Campaign and Siege.

There’s a self-guided driving tour or you can make a reservation to take a guided park tour.

There’s no shortage of things to see and experience. I would recommend beginning your tour at the visitor center. Check out the more than 1,400 memorial monuments, tablets and markers which cover the 1,800-acre park.

The park also features an impressive 20 miles of trenches and earthworks which have been reconstructed to reflect the time period.

There’s even a gunboat! You can see the U.S.S. Cairo Gunboat. There’s also a Museum located within the park, enabling visitors to view the restored vessel, along with Civil War-era artifacts recovered during the boat’s excavation.

Why Listen to Us About National Parks Near Jackson? 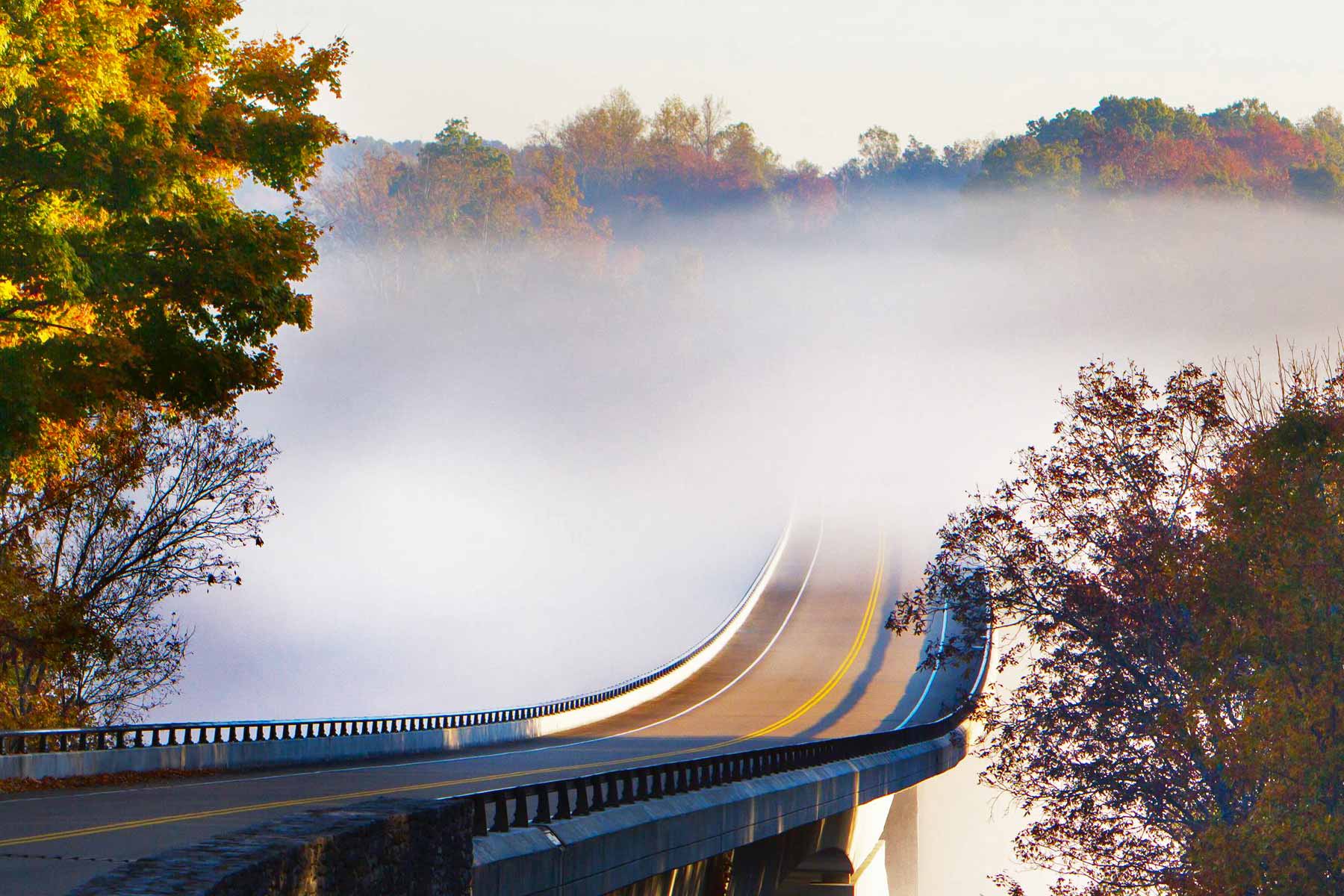 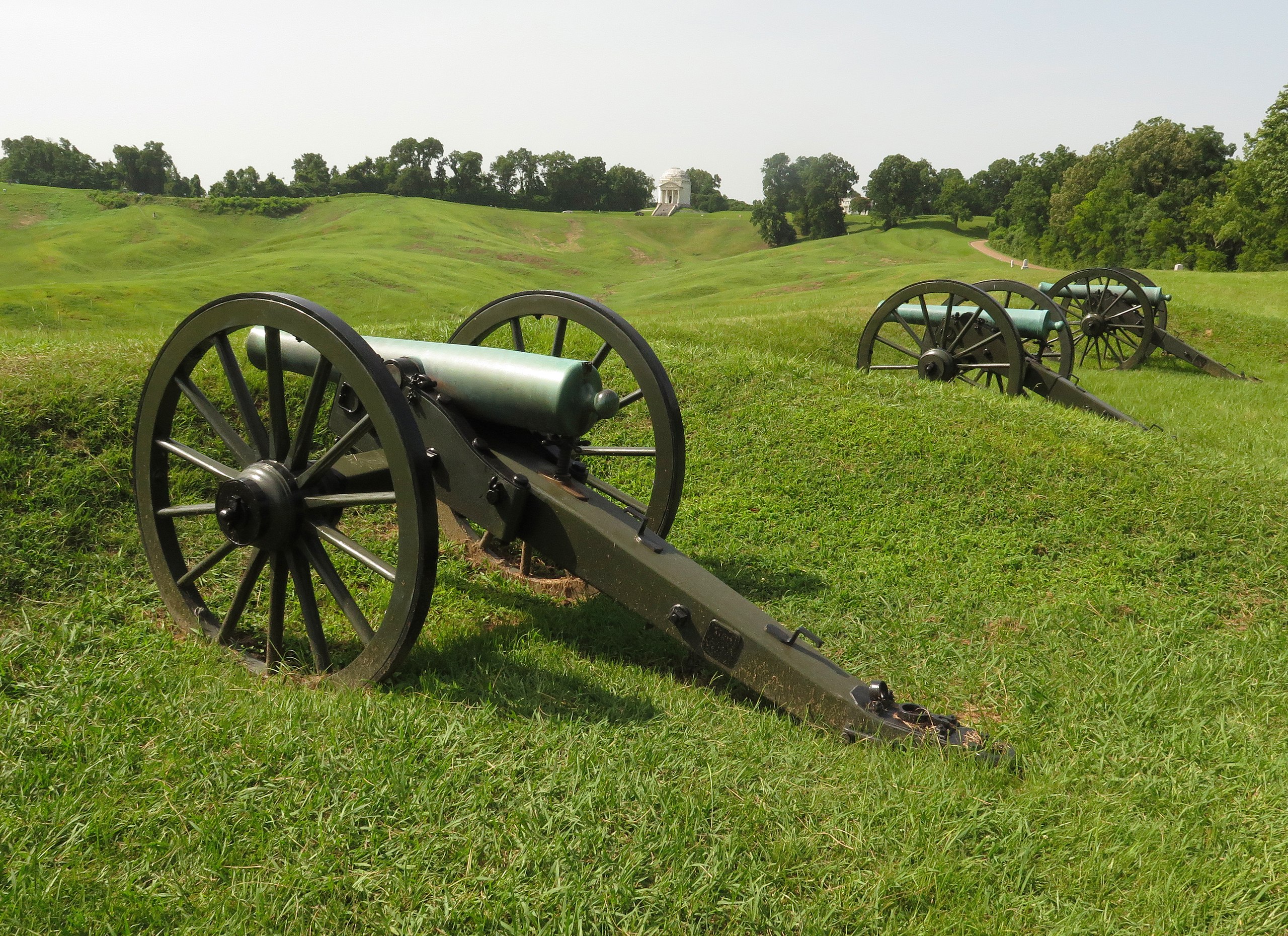 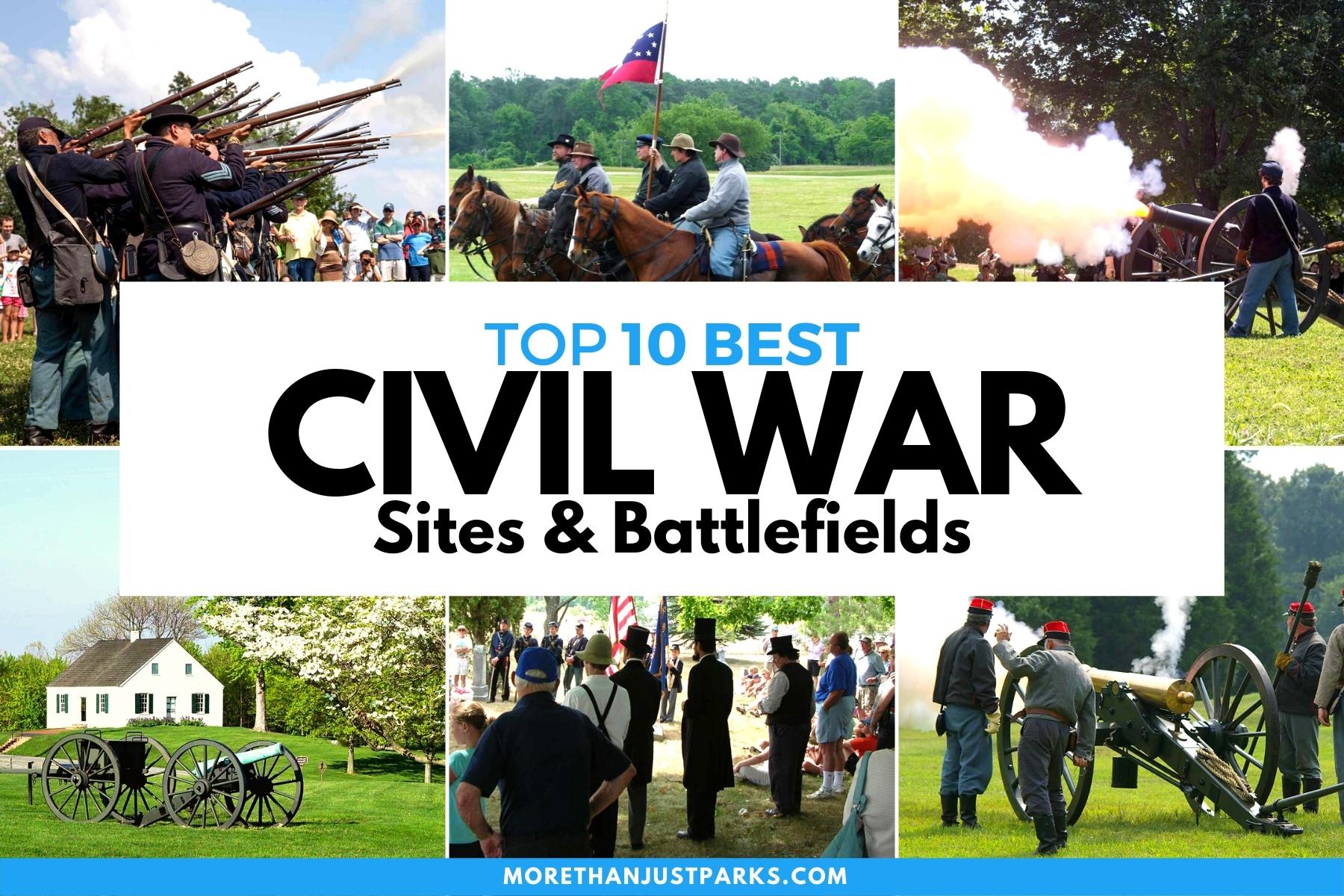 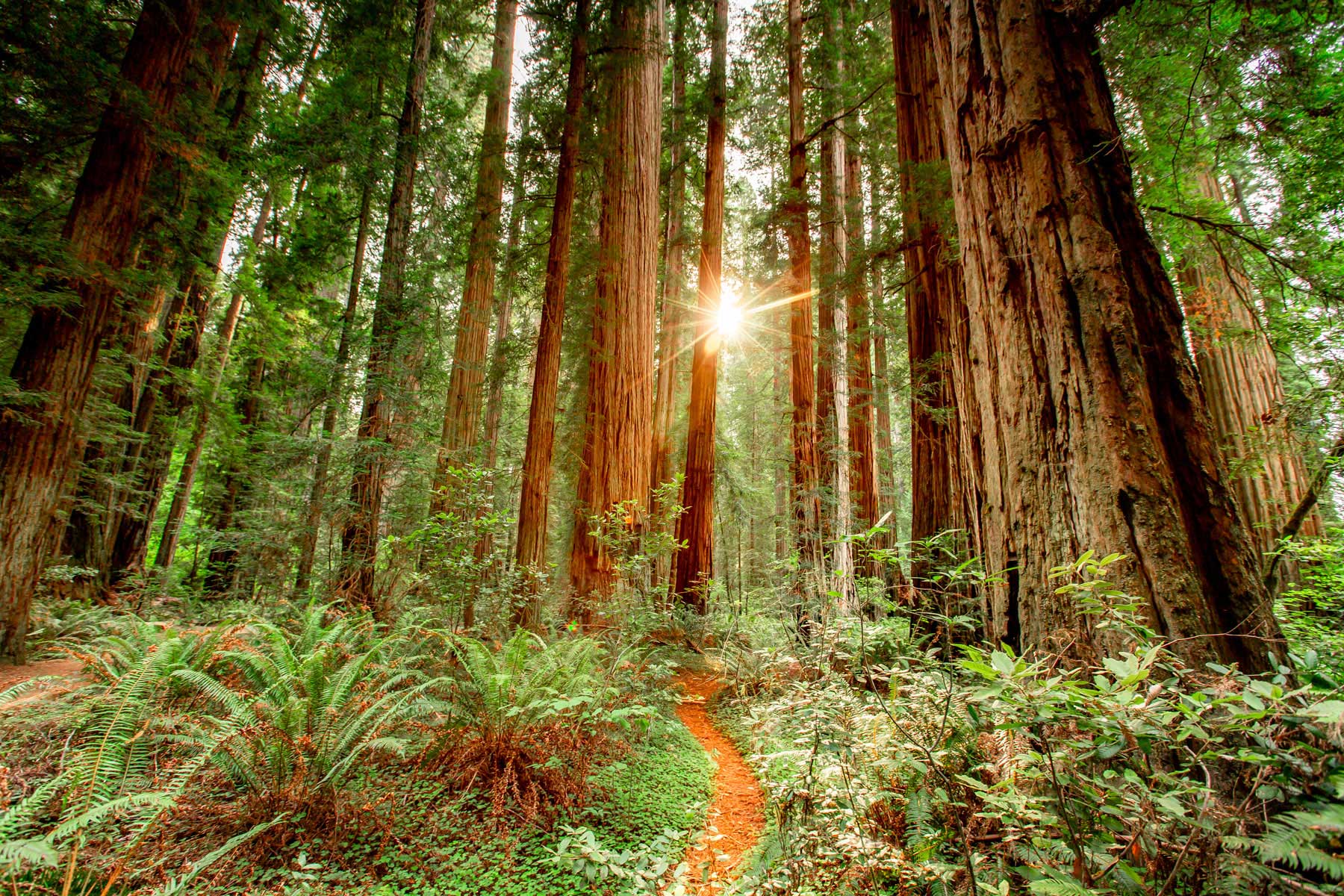